With a little luck, maybe there would be one glimpse remaining of the Perseid meteor showers predicted to light up the night skies last weekend. At least that was my plan for getting up at 5:00 a.m. Sunday morning, a plan that sounded really good the night before.

After sleeping right through five, I was hoping there might be just a twinkle or two left at six—the time my feet finally met the floor. Both times were incredibly early to rise and shine after a festive wedding that had ended scant hours earlier.

No lucky shooting stars for me, however. The skies were clear enough, and it was still plenty dark enough 15 miles into the Medina Lake Hills area from Bandera, the nearest city to where I was that morning in the Texas Hill Country. Reports touted the area as an optimum viewing spot for the predicted showers, but no sign of a meteor or falling star could I see.  Half a cup of coffee into scanning the skies, the only celestial light besides every morning’s array of the moon and stars was a hint of imminent sunrise on the horizon.

The Hill Country west of San Antonio is beautiful at any time of day or night. Coffee and a morning walk along country roads, startling deer that moved about in the cedars and live oaks, made the effort expended to get up early worthwhile…even if the meteor showers failed to show.

Twenty years ago, give or take a year or two, half a cup of coffee on a starry night just a couple of miles as the jack rabbit travels from where I was walking this past Sunday morning proved to be worth every bit of the effort. The heavens above the Lake Medina region south of Pipe Creek, Texas, that night rendered a spectacular meteor shower to entertain my son, Lee, and me. From the backyard atop our five-acre hilltop home site where we lived at the time, Mother Nature put on a spectacular show of light splashing across the night sky as the always-brilliant Texas stars looked on.

Time seemed to go by quickly before falling stars faded and the hour grew late, ending a great night of star gazing with my son. The memories we made marveling at the beauty of nature, I will never forget.

On this recent Sunday morning, I was hoping to add another Hill Country heavenly light show to the memories made years ago with Lee. Whether it was because of my inability to roll out of bed earlier, or because this year’s meteor showers failed to produce predicted performances, there were no new memories to add this time. Meteor shower memories, that is. 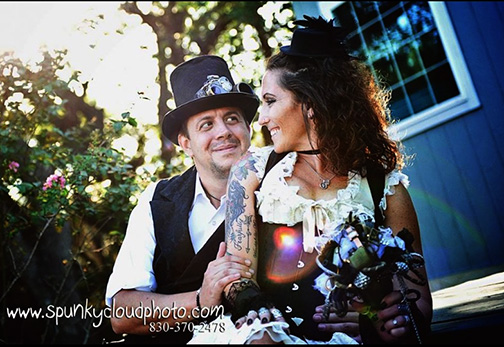 My reason for being in the Hill Country, almost 20 years after moving back to my native East Texas, was to attend the wedding mentioned earlier,  Lee’s wedding. Lights illuminated the night sky Saturday, all right. But this time, it was electric lights providing the glow, hanging in the huge live oak tree in his bride’s parent’s back yard where the nuptials were celebrated. Mother nature was again showing off, albeit with beautiful evening skies and a gorgeous sunset. As darkness fell, stars beamed brightly, both in the sky and in Lee and Holly’s eyes, as they vowed to forever be one.

So it was that lucky stars really were, in a manner of speaking, falling once again last weekend in the Texas Hill Country. This time, they were for my son and his new bride providing beautiful Hill Country memories for them we will never forget.