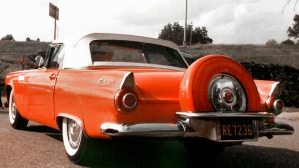 asphalt—all at one complex rivaling the size of a small third-world nation.

The center of attention is a neon embellished eatery with signage flashing, “Open 24 Hours” … as if they really needed to advertise. Willie and Waylon wail from a jukebox somewhere just inside where clinking china cups and saucers combine with conversational chatter of big rig drivers laughing off one more tale of life on the road, and finishing off one last cup for the road.

The aroma of steaming eggs and sizzling bacon wafts throughout, sending hunger signals off the chart and increasing the craving for that first cup of coffee. Waitresses shouting orders to busy cooks finish off this surreal sensory circus.

The great oases beckoning to road weary drivers along the nation’s concrete super slabs. Great food and friendly waitress stories born in truck stops are legend from coast to coast, but the stories take on a personal meaning with each individual truck stop dining experience.

Such was the case early one morning last fall while traversing southern states in a ’56 Ford Thunderbird headed back to the East Texas pine thicket. As the sun began tinting fading darkness with traces of orange, violet and red, I had already been rolling for more than an hour. “Tranquility” doesn’t do justice for describing the sensations of early morning, long-distance traveling in a classic car that has been on the road since Eisenhower’s first term.

Tranquility gave way to hunger when I spotted the brightly illuminated billboard proclaiming “good food” at the truck stop just ahead. Seemed like the perfect solution to my immediate need.

After roosting the little ‘Bird at the edge of the parking lot and entering the building, I mounted the last empty bar stool at the counter. I was still looking down, making sure the split in the plastic cushion didn’t interfere with a pleasant dining experience, when a white china mug hit the counter just short of my chin. Rolling my eyes upward, I saw a name tag letting me know that it was Gail who was sloshing coffee in the mug without spilling a drop on either of us.

Coffee was still splashing when she firmly planted a menu right beside the mug. As my eyes continued upward to meet hers, she smiled and greeted me with a “good morning, honey,” no less sincere than one with which she might have awakened her significant other scant hours ago.

As Gail walked away, heads slowly rotated in unison as every guy at the counter turned to get a glimpse of jeans that fit tight enough to dramatically and delightfully demonstrate moves sufficient to create a flurry of “backfield in motion” flags at any football stadium in the land.

Turning blurry eyes back to the menu, I raised the coffee mug and trembled at the excitement of my first sip of the day. One taste of truck stop Joe exuded “good morning world” vibes strong enough to miraculously restore 20/20 vision faster than a Southern tent revival faith healer. After all, it’s hard to remain sleepy drinking coffee resembling Quaker State 30-weight with more than 10,000 miles on it. Taste wasn’t bad however, that is for coffee that was strong enough to easily support a spoon in an upright position.

In a flash, Gail was back packing an order pad and pencil. “What ‘cha havin’ this morning sweetie,” she asked between smacks of chewing gum.

“What do you think about the sausage and cheese omelet,” I asked.

“My favorite,” she smacked though a smile.

I hardly had time to take in the ambiance and size up the clientele before tight-fitting jeans was back with an omelet the size of Big Tex’s hat. It was accompanied by two biscuits the size of Cadillac hubcaps smothered in cream gravy with hash browns hanging precariously off one side of the plate.

Moments later and almost ready to declare defeat after eating little more than half the plate’s contents, I caught a glimpse of an older couple approaching the restaurant. The silver-haired “Missus” opened the door, heard the music, took one look at the gimme cap crowd and Gail’s jeans before spinning her hubby around in his loafers, grabbing him by the arm and making a hasty retreat.

Still sopping gravy with the remains of the last biscuit, I thought to myself, “How sad. Those folks just missed the best omelet east of the Mississippi and the opportunity to collect a first-hand story about a great truck stop meal and a friendly waitress named Gail … sporting some of the tightest jeans south of the Mason-Dixon line.